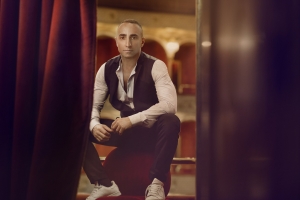 Born in Rome, GIULIANO PEPARINI is recognized as one of the most prolific directors and choreographers and eclectic of the international scene. Finalized at the School of American Ballet in New York on his return to Europe he was hired by Roland Petit at the Ballet National de Marseille, becoming, in 1997, Danseur Etoile. Afterwards he was Assistant and Maître de ballet of the great Petit, and reenacts his ballets for the Opéra de Paris, the Bolshoi Theatre in Moscow, the National Opera of Tokyo, the Teatro alla Scala in Milan, etc.
In 2004, he met Franco Dragone with which it shares the same culture and together they create the show “Le Reve”, one of the largest and poetic performances ever seen in Las Vegas and the show “The House of Dancing Water”, for six years in Macau.
He works in film in collaboration with great directors and in 2013, after 20 years of absence from the Italian scene, returns as an Artistic Director and Choreographer of the talent show “Amici 12”, Mediaset – Canale 5 TV.
On 20 December 2015, at the Teatro dell’Opera di Roma, debuts a very personal adaptation of the ballet “Lo schiaccianoci.”
New international productions await him in Canada, Orient and Europe.