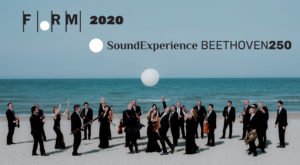 FORM – MARCHIGIAN PHILHARMONIC ORCHESTRA
SYMPHONIC SEASON 2020
JESI, G.B. PERGOLESI THEATRE
In collaboration with the Pergolesi Spontini Foundation and the Municipality of Jesi, the symphonic season of the FORM, entitled Sound Experience – Beethoven 250, dedicated to the german composer to celebrate the 250th anniversary of his birth, starts from Jesi.
The Marchigiana Philharmonic Orchestra presents itself in 2020 with a new communication project that embraces music and the territory and places it at the center of the development and diffusion of musical culture in the regional territory, identifying it as “the soundtrack of the Marche”. At the Pergolesi Theater, thanks to the strong collaboration relationship with the Pergolesi Spontini Foundation, the FORM brings a rich proposal with nine concerts, to which is added the traditional New Year’s Concert, scheduled for Friday 3 January.